Cottage Labs have written a blog post about their project to add SWORD v2 deposit functionality into the DCC’s DMPOnline tool.  This new feature allows data management plans that have been created to then be deposited into a central repository using SWORD v2.  By using SWORD v2 (rather than SWORD v1), the data management plans can be re-deposited and updated within the repository as they change.

The code for DMPOnline with Repository Integration is available from: https://github.com/CottageLabs/DMPOnline Cottage Lab’s project page for the project is http://cottagelabs.com/projects/oxforddmponline

The 7th International Conference on Open Repositories in Edinburgh is less than a week away now!  Here is a list of SWORD related presentations at the conference by both the SWORD team, and others:

If you are interested in the use of SWORD for the deposit of research data, take a look at the DevCSI event report from their recent ‘Managing Research Data Hack Day‘ event report:

There is an interesting discussion and associated video about using SWORD v2 to deposit files using BitTorrent.

We’re pleased to advertise the following:

Dryad (http://datadryad.org) is a repository for data associated with scientific publications. As Dryad grows, it is becoming more important to use established standards for exchanging data with other systems. Although Dryad is built on DSpace, the SWORD support in DSpace is not sophisticated enough to handle Dryad’s data model. Specifically, there is no way to submit a SWORD package to DSpace that includes multiple objects with structured relationships.

To correct these deficiencies, Dryad has a summer programming project available through the Google Summer of Code. The general aim of the project is to expand the capabilities of the DSpace SWORD module, allowing for objects wrapped in BagIt (https://wiki.ucop.edu/display/Curation/BagIt) packages and containing OAI-ORE (http://www.openarchives.org/ore/) manifests. Although the project is driven by Dryad’s needs, the new results will be broadly applicable within the DSpace community. The project will be developed in a configurable way so it may be included in a future release of DSpace. For more details, see the project description at http://bit.ly/GED8ZX.

If you’re interested, or know someone who is interested, don’t wait! The final application deadline is this Friday (6th April 2012), at 19:00 UTC. Send an initial notification of interest to the phylosoc group (contact information available on the project page). You are highly encouraged to create a draft proposal early this week so potential mentors may give feedback before the final proposal is submitted.

The second version of the SWORD resource deposit protocol, designed primarily to enable the deposit of scholarly works into content repositories, has now been released. Developed with funding from the JISC, the SWORD v2 project has built upon the successful and award winning SWORD deposit protocol to now support the full deposit lifecycle of deposit, update, and deletion of resources. In addition of the new technical standard, implementations for some of the most well-known repository platforms have been created, along with client toolkits and exemplar demonstrators.

Led by Richard Jones (Technical Lead) of Cottage Labs and Stuart Lewis (Community Manager), formerly of the University of Auckland, now of the University of Edinburgh along with oversight from Paul Walk from the UKOLN Innovation Support Centre, the project was steered by an international technical advisory group of 36 experts in the areas of repositories, standards development, and scholarly content.

The development of the standard will allow a new breed of smart deposit scenarios and software products that are able to deposit content into one or more repositories, track the deposits over time, interact with them and update, or remove them. Before SWORDv2, deposit interoperability took the form of single deposits, coined as ‘fire and forget’. Once a deposit had been made, no further interaction was possible. SWORD v2 extends its support for the Atom Publishing Protocol (AtomPub) by adding support updates and deletions. These will enable new interoperable deposit management systems to be built that will work with any SWORD v2 compliant system.

Deposit use cases which are now possible include collaborative authoring, or getting more integrated with the publication workflow where multiple updates and versions of documents are required. Further details can be found at the SWORD website: https://sword.cottagelabs.com/ or by emailing info@swordapp.org

A new paper about repository deposit scenarios has just been published in this month’s D-Lib:

The SWORD (Simple Web-service Offering Repository Deposit) protocol was designed to facilitate the interoperable deposit of resources into systems such as repositories. The use of an interoperable standard eases the burden of developing clients to deposit such resources. This paper examines nine different deposit use cases, and provides case studies and examples of each use case to demonstrate the wide range of repository deposit scenarios. The use cases range from the deposit of scholarly communication outputs from a publisher to a repository and the automatic deposit of data from laboratory equipment, to inter-repository transfer and collaborative authoring workflows.

Nine different deposit use cases are examined, along with case studies or examples for each:

We recently posted a survey about ‘Data Deposit’.  The survey is still open if you wish to respond.

The first question in the survey asks:

We asked this simple question as we wanted to find out the general level of knowledge about SWORD within the community who responded.  The survey was sent to various email lists with an interest in managing research data, SWORD, and repositories.  The following graph shows the responses to this question (survey responses as at 12/12/2011, number of responses = 35): 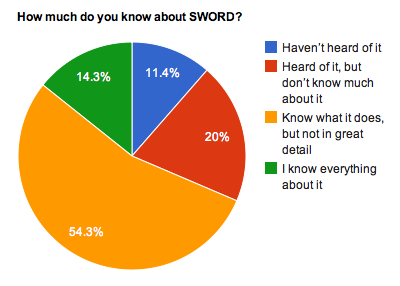 The responses confirm our suspicion that a lot of people have heard of SWORD and know what it does, but a reasonable proportion either haven’t heard of it, or don’t really know much about it.  So there is good news, and room for improvement in this result.
We’ll post further results from the survey over the next few weeks.

The SWORD v2 project has been asked by the JISC to look into the applicability of the SWORD protocol for depositing Research Data.  The SWORD protocol has always been agnostic about the type of resource it is depositing, however its initial development stemmed from a requirement for the deposit of scholarly communications outputs into repositories – these typically being small text-based items.

In order to investigate how well SWORD and SWORD v2 would deal with Research Data, we need to know about the different types of research data that you are working with.  This will allow us to discover some of the range of different data types in use, and the general and specific requirements of each.

We’ve tried to keep the survey short – it is only 9 questions long.  If you have a few minutes to share some information with us about the data you work with, we would very much appreciate it.

Visit the survey at https://sword.cottagelabs.com/sword-v2/sword-v2-data-deposit-survey/

As part of the SWORD v2 project finding, resources were allocated to implement it in a number of repository platforms.  First off the block to release SWORD v2 implementations as part of their core functionality are EPrints and DSpace:

There are also client code library implementations available if you wish to create SWORD v2 clients.

Have you wondered how the SWORD v2 development process has taken place, from humble beginnings in 2010 to the standard today?  Richard Jones (SWORD v2 Technical Lead) from CottageLabs explains during a Pecha Kucha session at the 2011 Repository Fringe event #rfringe11